Let us take a trip back in time as history comes to life with entertainment all-the-day-long on multiple stages
with games, musicians, gallant knights on horseback in jousting tournies to win the Queen’s favor, the sound
of steel meeting steel, feasting, arts & crafts, and so much more. Check out some of our
Performers/Entertainers/Musicians below!!

Knights of the Realm

In the World Tournament Of Champions, Knights of the Realm, an international troupe of skilled horsemen, archers, and swordsmen bring the games and jousting of 16th century Europe to life. The clash of steel rings throughout the Vale as each Knight brings passion and prowess to defend the honor of their home country. Feel the ground tremble with pounding of hooves, lend your voice to cheer your favorite Knight to victory, as they vie for the favor and honor of Her Majesty, Mary Queen of Scots! 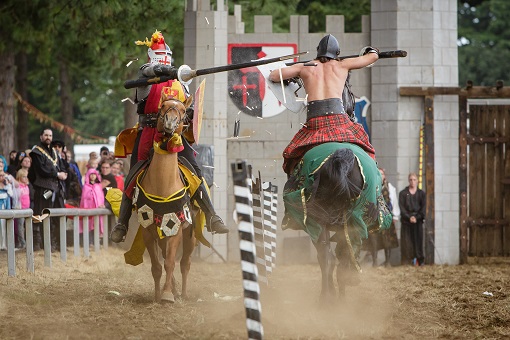 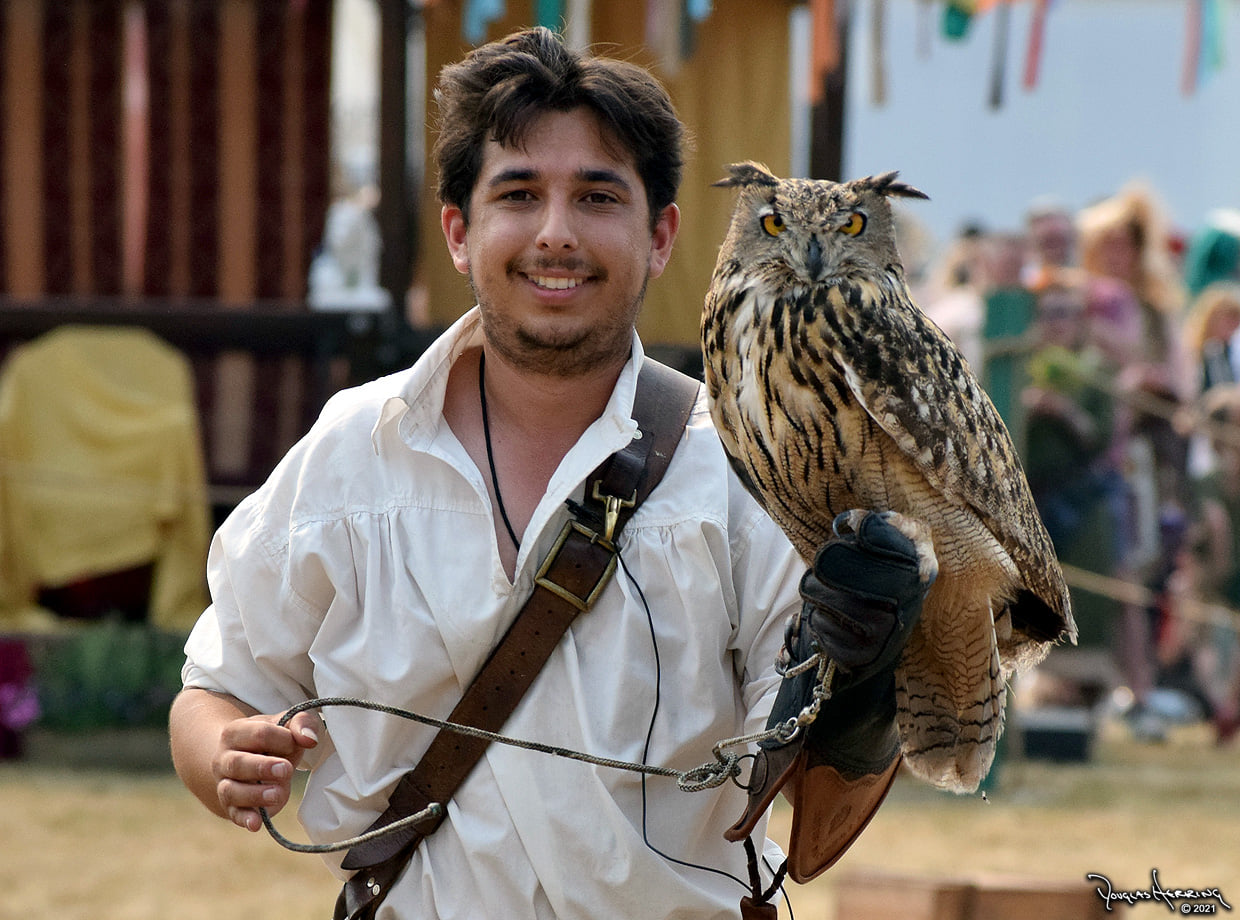 ***New This Season!*** Raptor Events’ master falconer showcases the captivating art of falconry, a favored sport of the nobility of medieval Europe. Majestic birds of prey soar through the sky as they beat their wings in pursuit of their quarry. Conservation and animal education are at the core of the Raptor Events mission. After-show activities include a meet-and-greet with the falconer and his feathered assistants. As part of their company of conservation ambassadors, Raptor Events also displays a variety of reptile species, offering an engaging experience for a wide range of animal enthusiasts.

***New This Season!!*** Tera “SUPERNOVA” Zarra is a professional strongwoman, hand-balancer, and aerialist. She has performed for Nike, Google, Intel, Yelp, Game of Thrones, Red Dead Redemption II, and thousands of national and international venues.
Join Supernova as she bends steel, smashes stone, and demolishes expectations. Thrill as this world-class force of nature brings her daredevil acrobatics, superhuman strength, and family-friendly comedy to Dunrose! 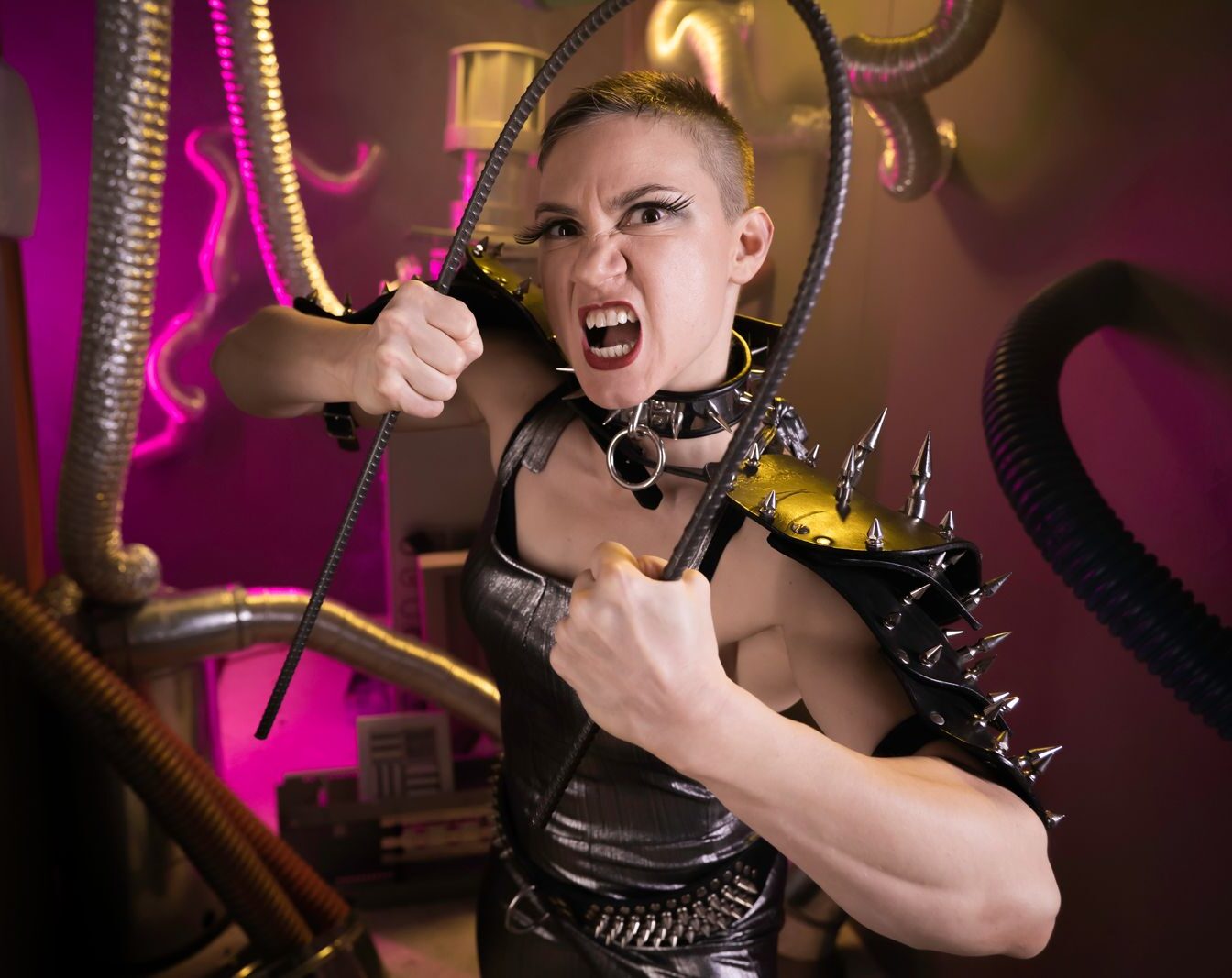 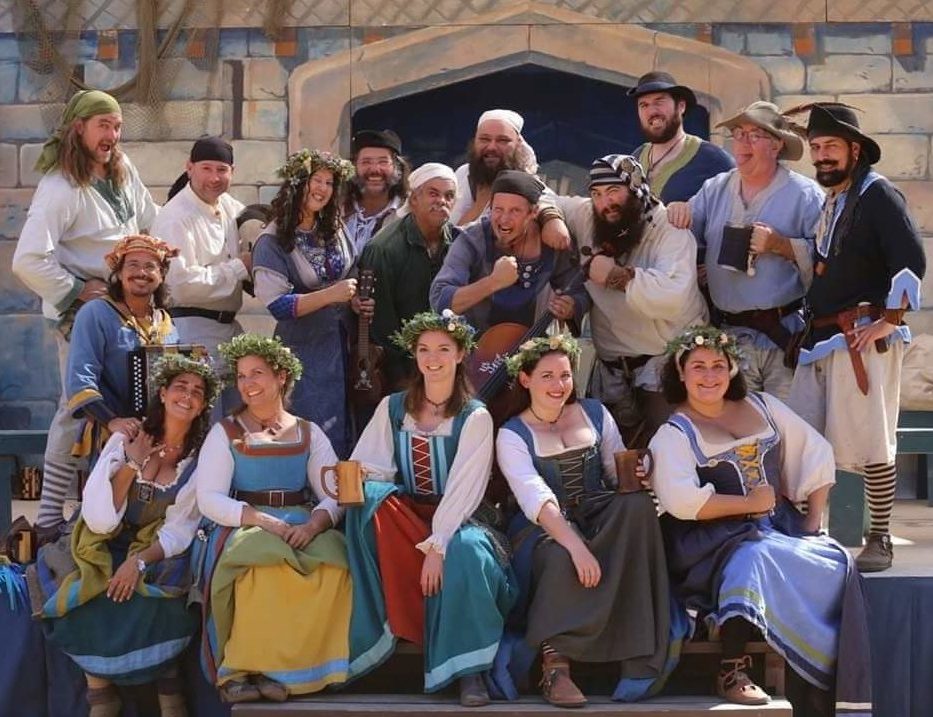 The Seadogs are a group of performers who perform Nautical music and songs, with a healthy injection of comedy and sailor-y theatrics. Several instrumentalists, along with an entire group of talented singers who perform a wide range of seafaring music…from old world shanties & work songs done in the traditional style, to more upbeat interpretations of classic sea-songs, to modern & original seafaring music. The Seadogs have been entertaining West Coast audiences for over 30 years, and have a strong background in entertaining audiences both young and old in nearly every conceivable venue.

The Lynx Show is a unique blend of magic, sword swallowing and comedy. Lynx is a veteran when it comes to performing at Renaissance festivals across the country. Not only is there audience interaction and participation but a strong positive message at the end. From death defying feats of amazement to bewildering moments that just can’t be explained, The Lynx Show is sure to thrill you! So, don’t miss out and be part of the fun! 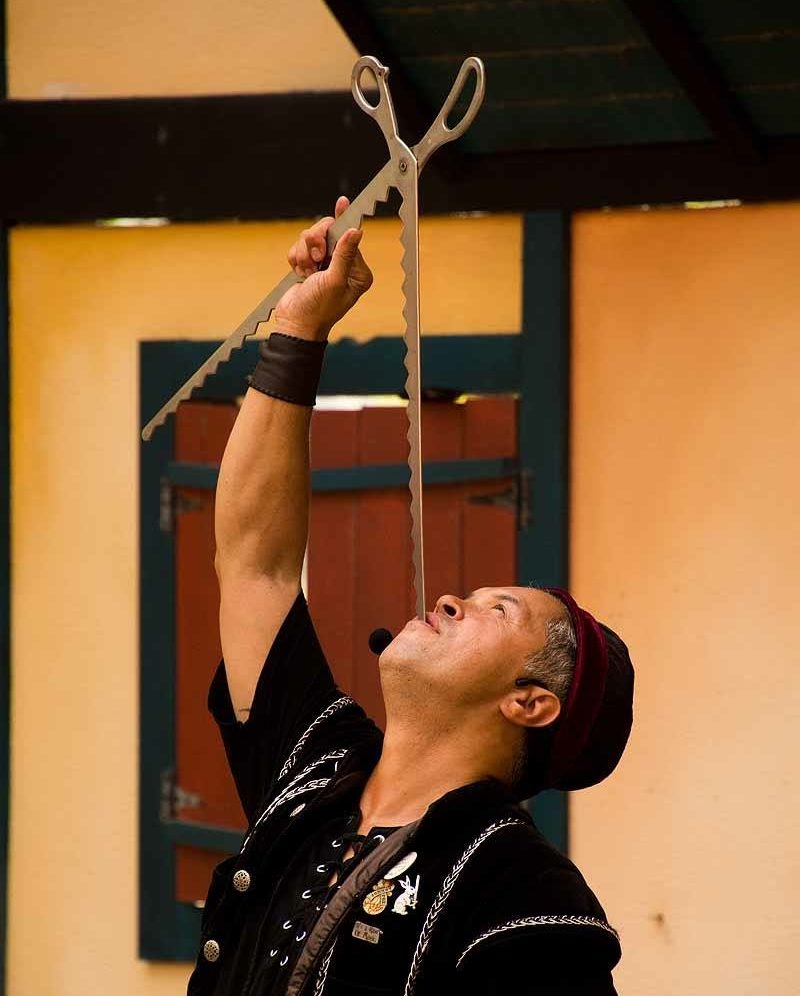 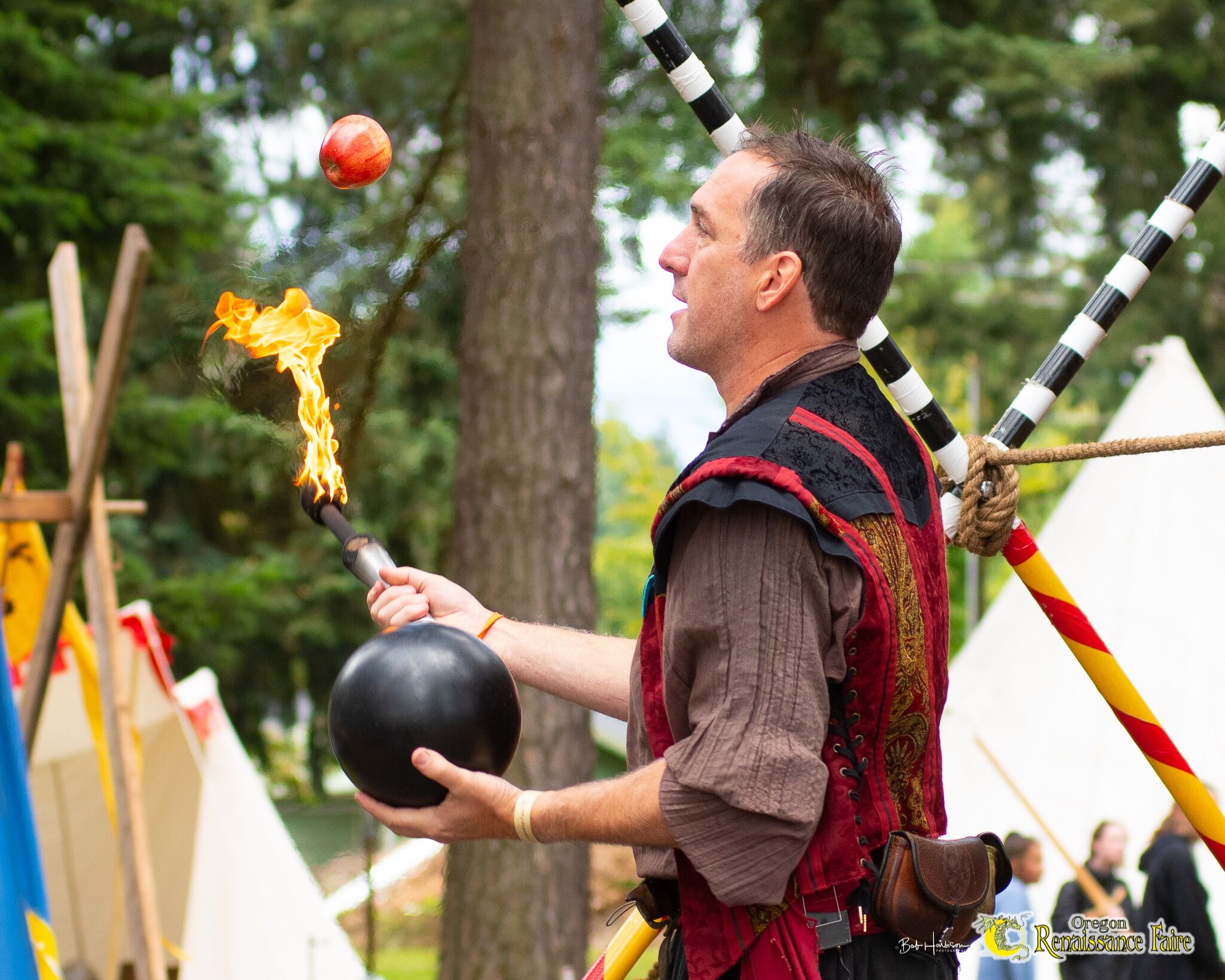 Broon is a variety comedian who has toured all over the country for more than twenty years presenting a show of side splitting laughter and amazing stunts. With a strong background in improvisational theater and street performing he has developed a spontaneous and edgy style that guarantees no two shows will be exactly alike. One part stand up comic and one part side show performer Broon amazes with magic, fire eating, juggling and bullwhips all wrapped up with a sardonic wit that will leave you breathless.

Join Robin Hood and Maid Marian for magical storytelling! Six members of the audience star in these high-energy, interactive retellings of “St. George & the Dragon” and “The Tales of Robin Hood”! Heroes, villains, cheering, screaming, and hilarity ensues! 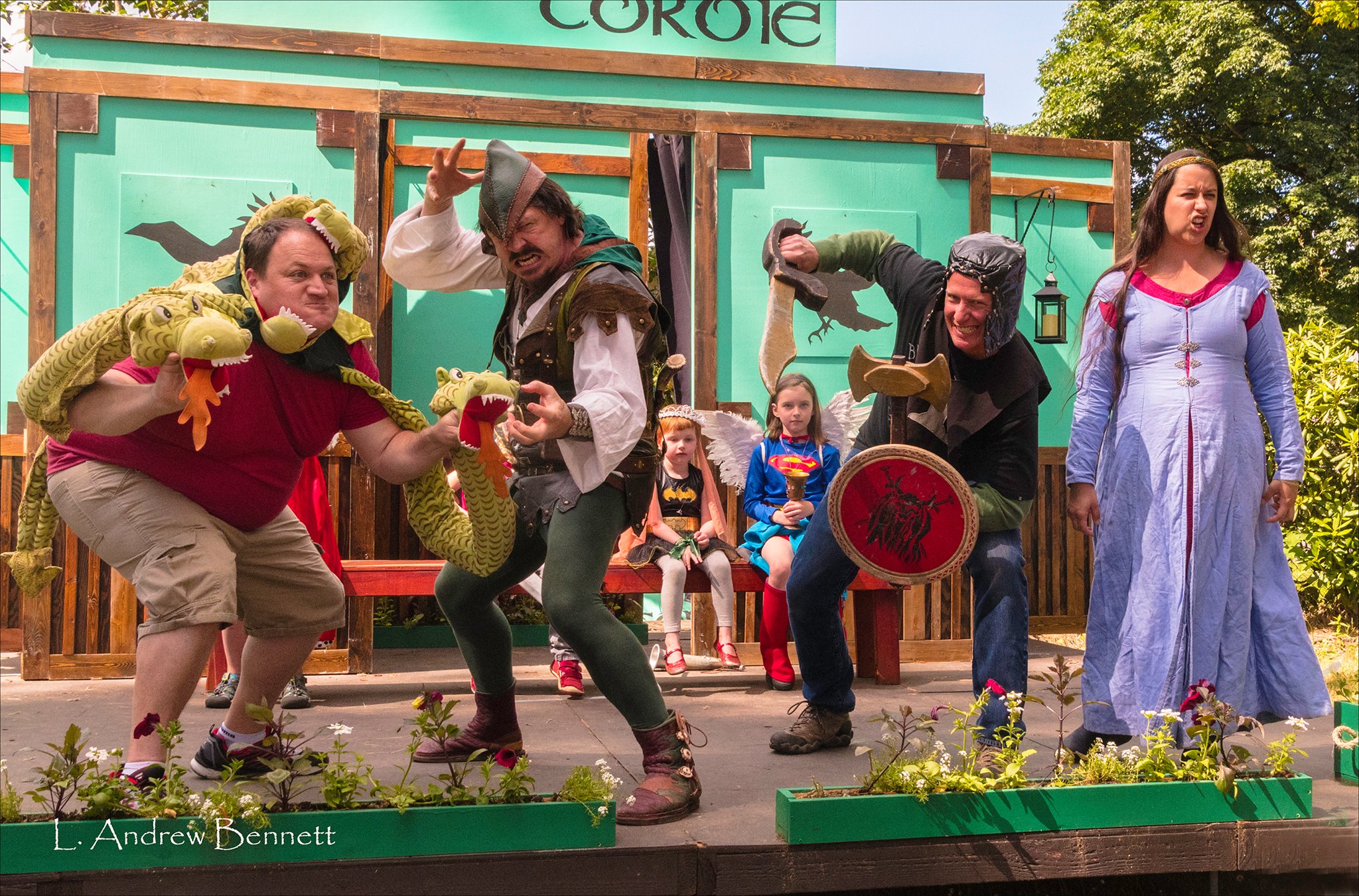 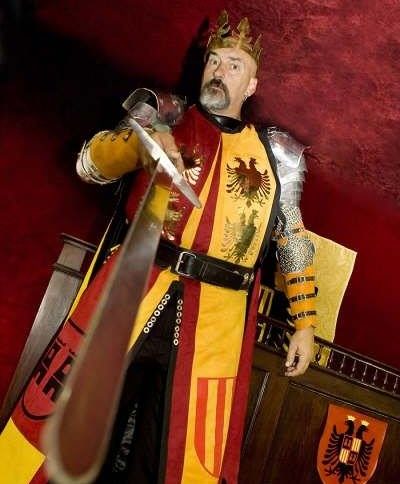 In a land far away… In a time long ago – Brave Knights fought for Honor, Glory, & Chivalry. Led into battle by Sir Rey Sancho, “The Giant of Aragon!” This 7 foot tall “Lord of the Ring” will command the Knights at your bidding. With a voice like thunder & a wit like lightning, he will enthrall both young & old, with a show for the ages!” Victory awaits you in the Jousting arena! Huzzah!! 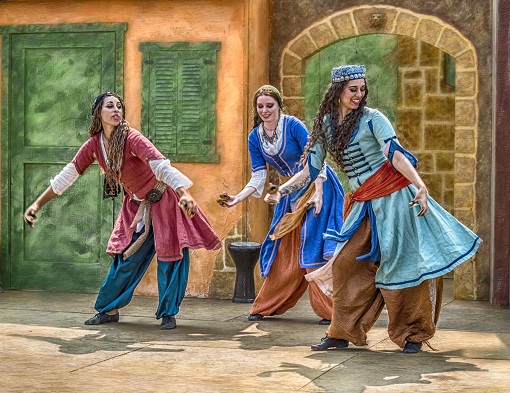 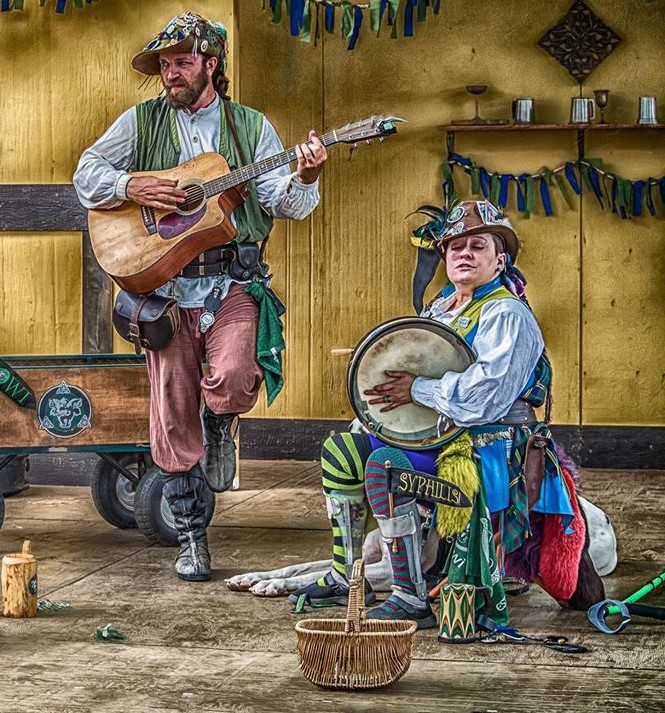 For years, Seattle based BOWI has been entertaining audiences with a blend of traditional Celtic music and unique energy. The BOWI sound encompasses a wide range of music including driving Jigs and Reels, exciting vocals, and beautiful ballads. An incredibly flexible and adaptive group, BOWI has performed at everything from Pubs and local faires, to private parties and weddings. Acoustic or “Plugged in”, BOWI has never failed to get the hands clapping and feet stomping.

Witness the ‘Manis O’Tool and his Imperial Tibetan yak show’! Please note that on the very rare occasion that his incredibly trained yak, Clark, goes missing right before the big show, Manus will be forced to improvise – fortunately he’s got hilarious stories, jokes, some audience participation and maybe even a dangerous stunt or two that he can pull out of his sleeve in a pinch… Enjoy the show, and if needed, please keep an eye out for Clark. 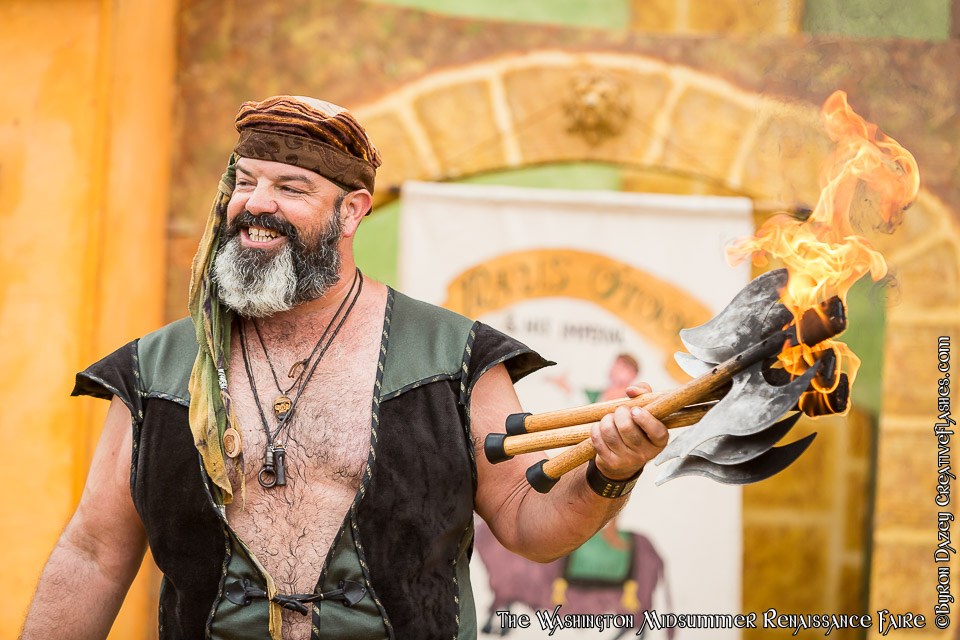 After studying mandolin under the tutelage of a wise master deep in the desert, the minstrel known as Darius set forth to share the gift of music. From street corners to the queen’s court, an eclectic blend of medieval, renaissance, and celtic ballads and dance music is sure to delight Lords, Ladies, and Fairies of all ages and walks of life.

Cirque du Sewer- the acrobat with rats and cats! As seen on ABC’s “The Gong Show”, physical performer/ rope walker Melissa and her trained animals perform stunts together that will change your ideas of what rats and cats are capable of! 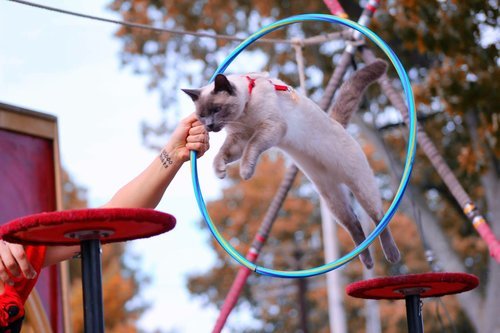 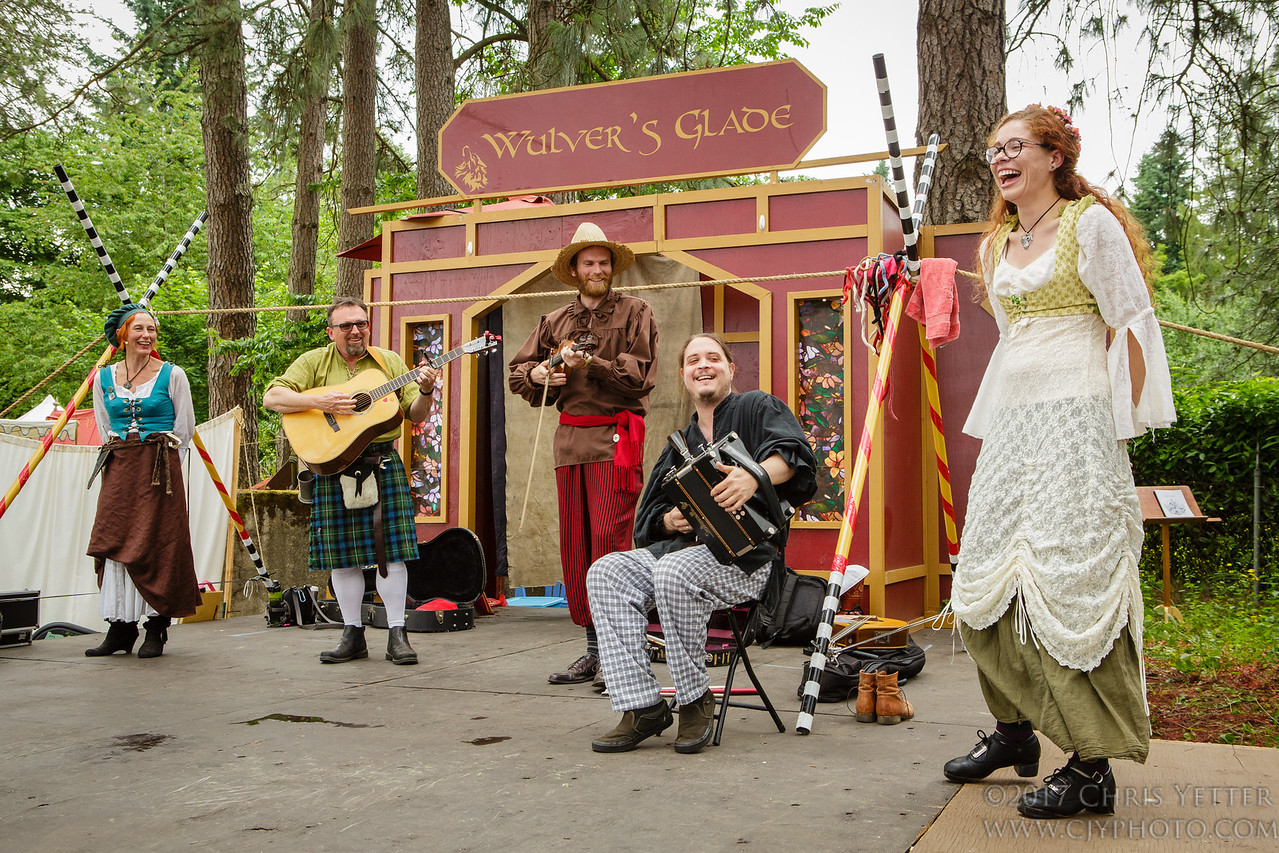 Putting the Stomp back in Trad! The Stomptowners is a rare experience blending dynamic traditional Irish music with voice and hot Irish dance. This four piece puts together Uilleann Pipes, Irish bouzouki, fiddle, whistles, breathtaking vocals and driven foot percussion. Tradition comes to life with the all energy today’s audience craves, The Stomptowners truly bring something for everyone.

The Piccolo Puppet Players presents The Punch & Judy Show! Done in the traditional British style. Prepare for lots of color, laughter and audience interaction. Mr. Punch is a light hearted anti-hero who gets himself in and out of trouble by the use of his wits. He meets many colorful characters throughout the show: Judy, his wife; the Baby; Joey the clown; the Constable, who never fails to misapprehend Mr.Punch, the Crocodile who swallows his stick and many others! Join us at the Bairns Puppet Theater! 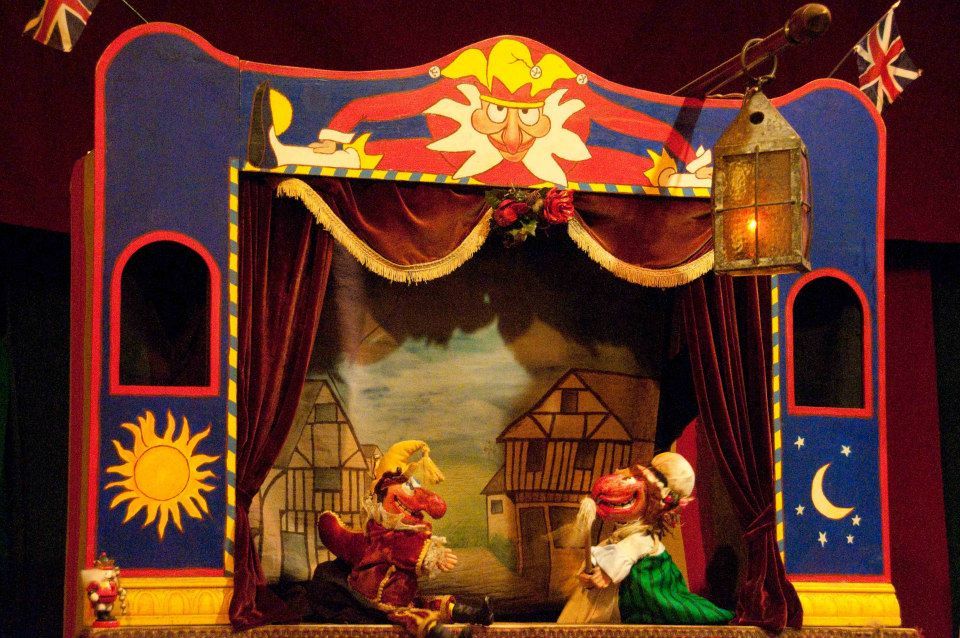 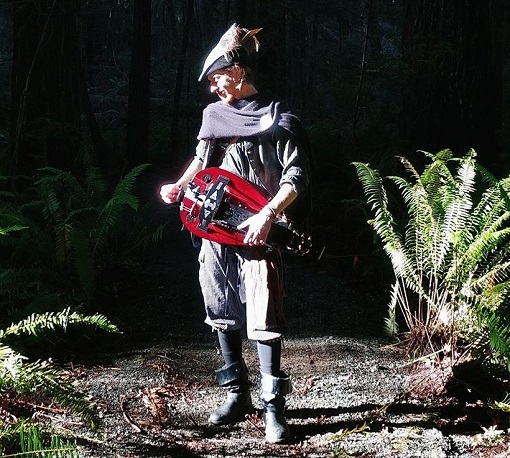 A Professional Noise Maker specializing in song and tale told to the accompaniment of the Hurdy Gurdy in the style of the wandering minstrels of old.

Samantha, the Mistress of Melody is a bard in the classic sense. Telling tales in song with her Celtic harp and her voice she entertains, recalling stories both old and new. Samantha is also a member of the Irish band, Possibly Irish, whom of which she plays harp with in the summers at the Enchanted Forest in Salem, Oregon. 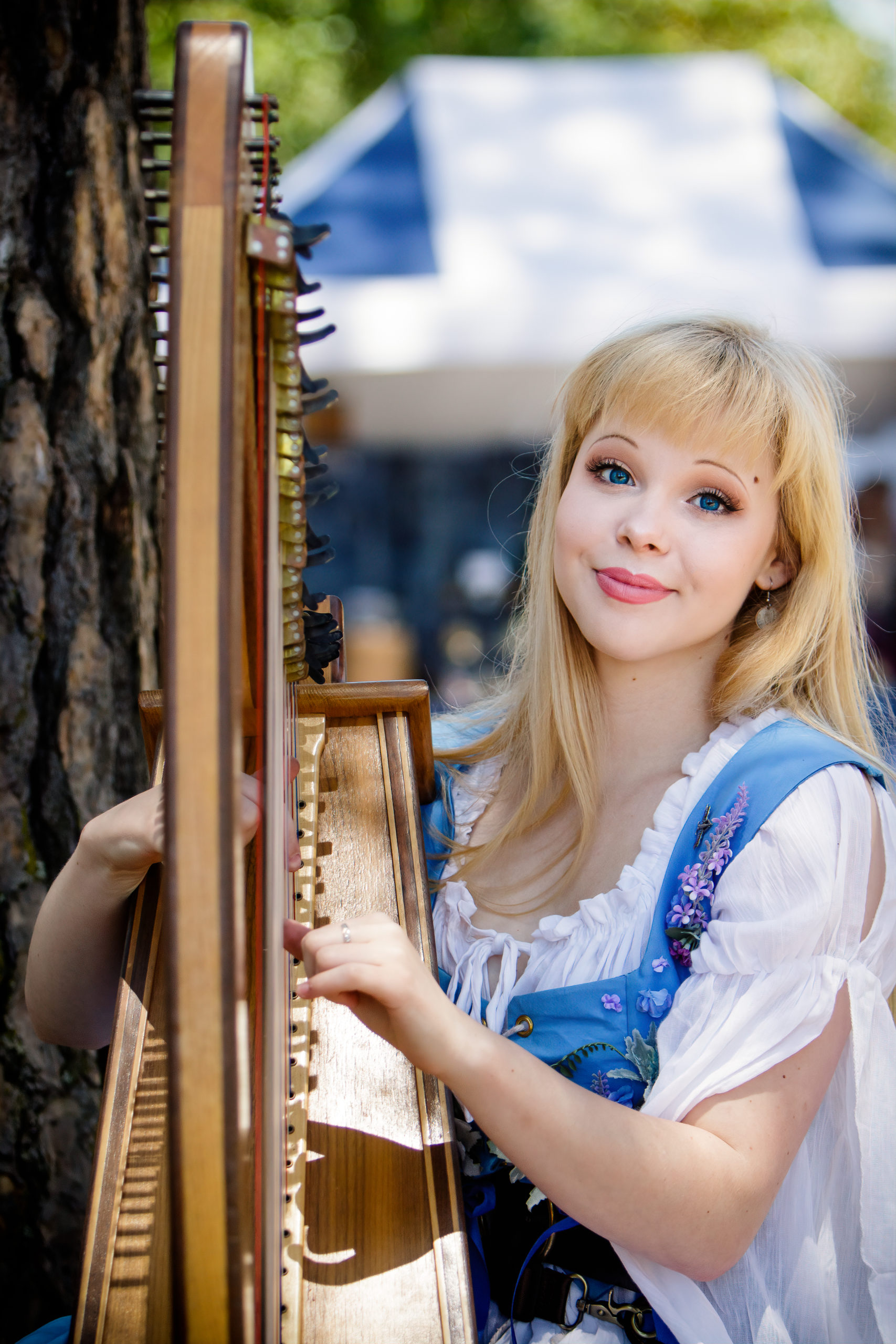 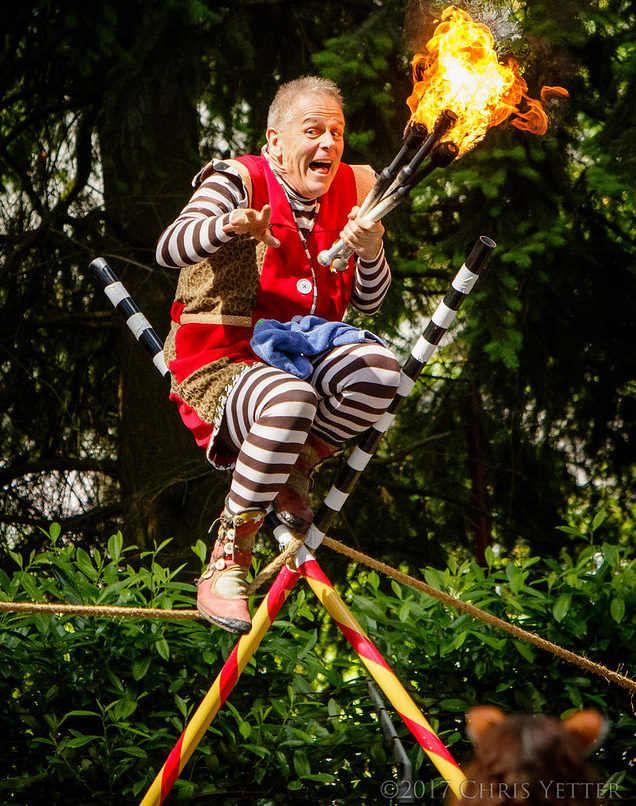 Adults and children alike have loved The MooNiE Show for over 20 years! An immersive silent comedy experience that brings the audience in using whistles and gestures to put everyone in stitches. Adding to the comedy is MooNiE’s mesmerizing balancing and juggling skills, creating an enjoyable family-friendly show that has something for everyone. Stick around for his final show of the day when MooNiE teams up with the edgy sarcastic Broon for the largely improvised MooNiE and BrooN Show. A perfect double act, clashing and complimenting to create the ideal recipe for painfully good comedy where no one will know what they’re going to do next, including them.

For the first year EVER, we are having Saturday Night Entertainment! Join us from 7pm – 12am and enjoy special entertainment!

***NEW This Season*** BROTHER Angus and Aka 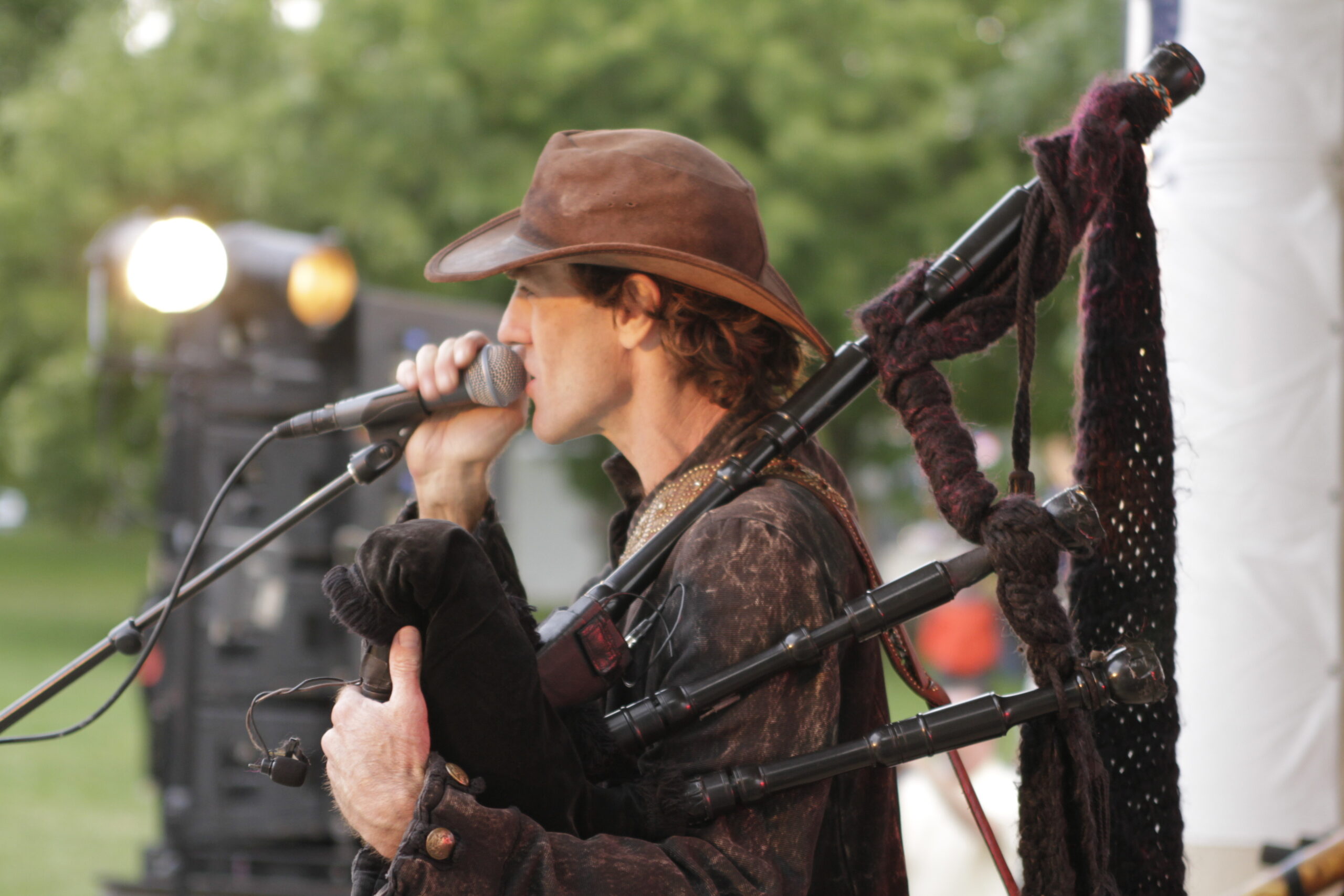 The evolution continues Founding brother Angus is reimagining the BROTHER sound with his Alaskan mate Alec “Aka” Dickinson. Hypnotic tribal rhythms emanate from Angus’ loop station, interwoven with guitar and his signature bagpipes. Over it all, Angus’ soaring vocals and storytelling transport audiences to another world. Alec’s soulful lap steel brings much loved songs to life in a whole new way and his harmonies evoke the original vocal blend of Angus’ brothers.

Says Angus: “Aka and I have been raising our kids together here in the southern Oregon mountains. That experience and the sensibilities of our native countries – huge, exciting frontier lands – inspire our music making in a unique and profound way. We’re excited to see where this journey leads us.”

You may have seen BROTHER on the hit TV series ‘ER’, or heard their music on the classic Baraka soundtrack. An episode of UPN’s ‘The Twilight Zone’ was written around one of their songs. Often cited as a trailblazer of the indie scene, BROTHER is the only independent band to play The Rock & Roll Hall Of Fame.
BROTHER has shared stages with Joe Walsh, John Entwhistle, Keith Emerson, Linkin Park and Alicia Keys and is the only independent band to have played the Rock and Roll Hall Of Fame.

Hypnotic rhythms emanate from Brother Angus’ loop station, interwoven with guitar and his signature bagpipes. Over it all, Angus’ soaring vocals and storytelling transport his audiences to another world.

As a founding member of the band BROTHER, Angus toured the world, recording fifteen albums and a DVD along the way. You may have seen BROTHER on the hit TV series ‘ER’, or heard their music on the classic Baraka soundtrack. An episode of UPN’s ‘The Twilight Zone’ was written around one of their songs. Often cited as a trailblazer of the indie scene, BROTHER is the only independent band to play The Rock & Roll Hall Of Fame.

BROTHER has shared stages with Joe Walsh, John Entwhistle, Keith Emerson, Linkin Park and Alicia Keys and is the only independent band to have played the Rock and Roll Hall Of Fame. 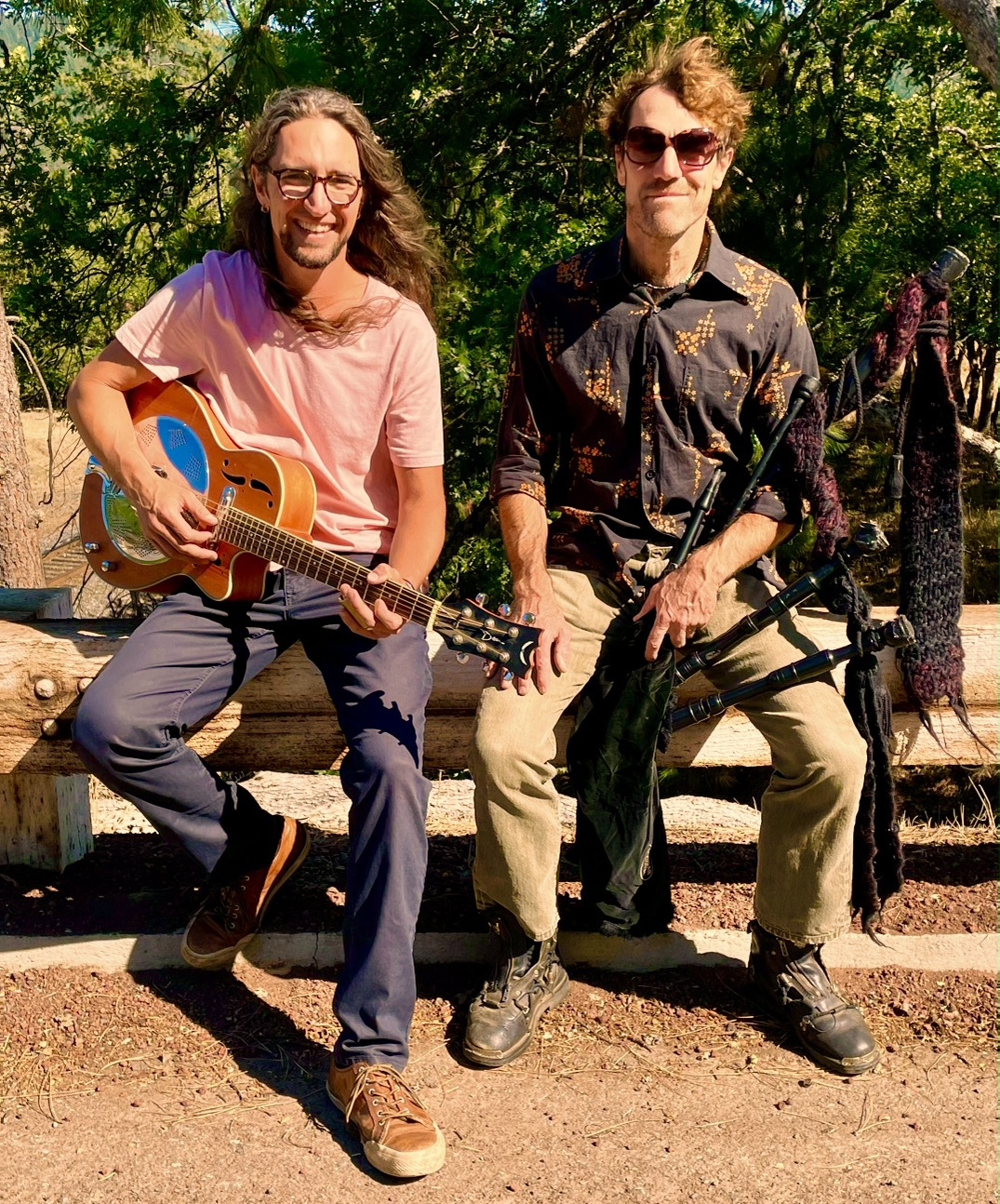 IGNITION will perform during intermissions of BROTHER. 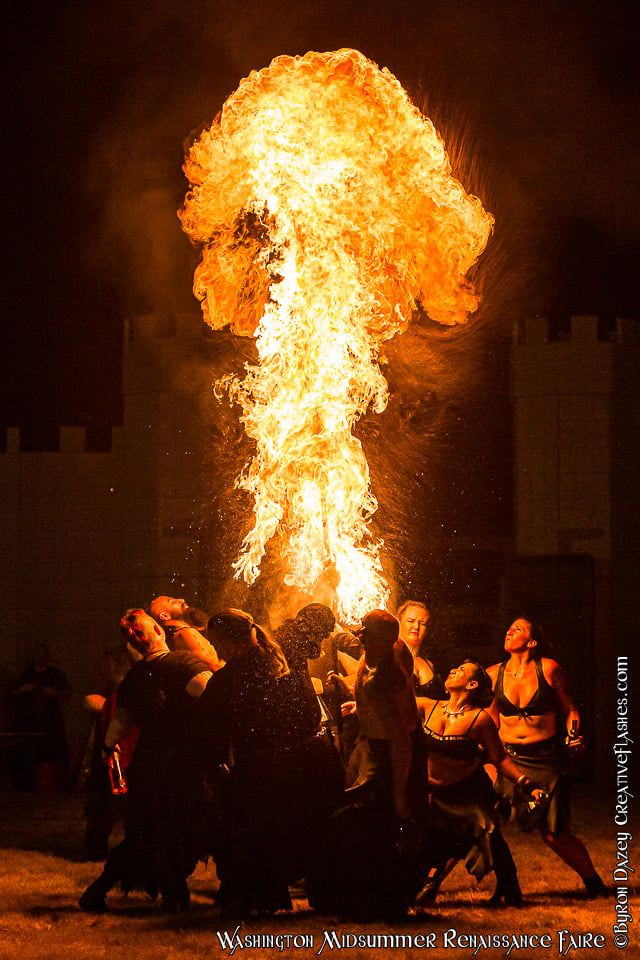 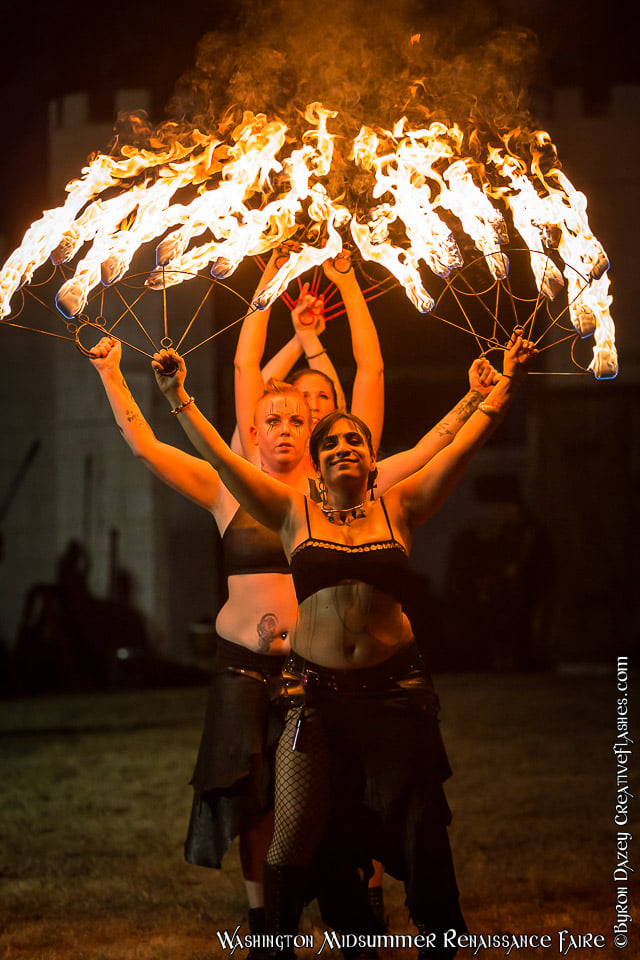